This year for Christmas i set myself the challenge to not buy anything new to give away as presents. Better for the environment and forces me to get creative1 with the stuff i already have lying around. I ended up designing something with my 3D-Printer. The filament technically did lie around… not sure if that counts though ;)

Anyways, this is what i came up with: 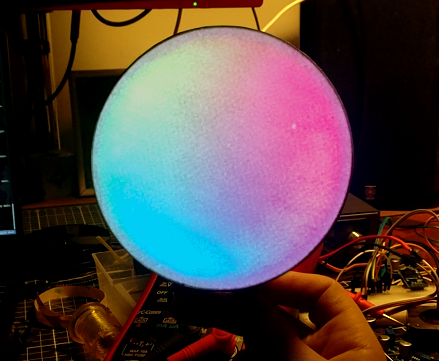 It's a 3D-Printed enclosure with some paper glued to as a diffuser for 23 RGB-LEDs. The brains is an ESP32 running micropython (which i praised in my last post). Right now it just plays 2 “animations” which you can switch between with a button on the bottom side of the case. A second button changes the brightness. That's all for the functionality at the moment. BUT when there is the inevitable break between meals on Christmas i plan to create some more nice animations and try to expose a REST-Interface to be able to change animation and brightness over the network.

I put the design files2, the code and some basic instructions on github. So feel free to make your own or suggest some changes ;)